FREE SHIPPING/RETURNS ON ORDERS OVER $99 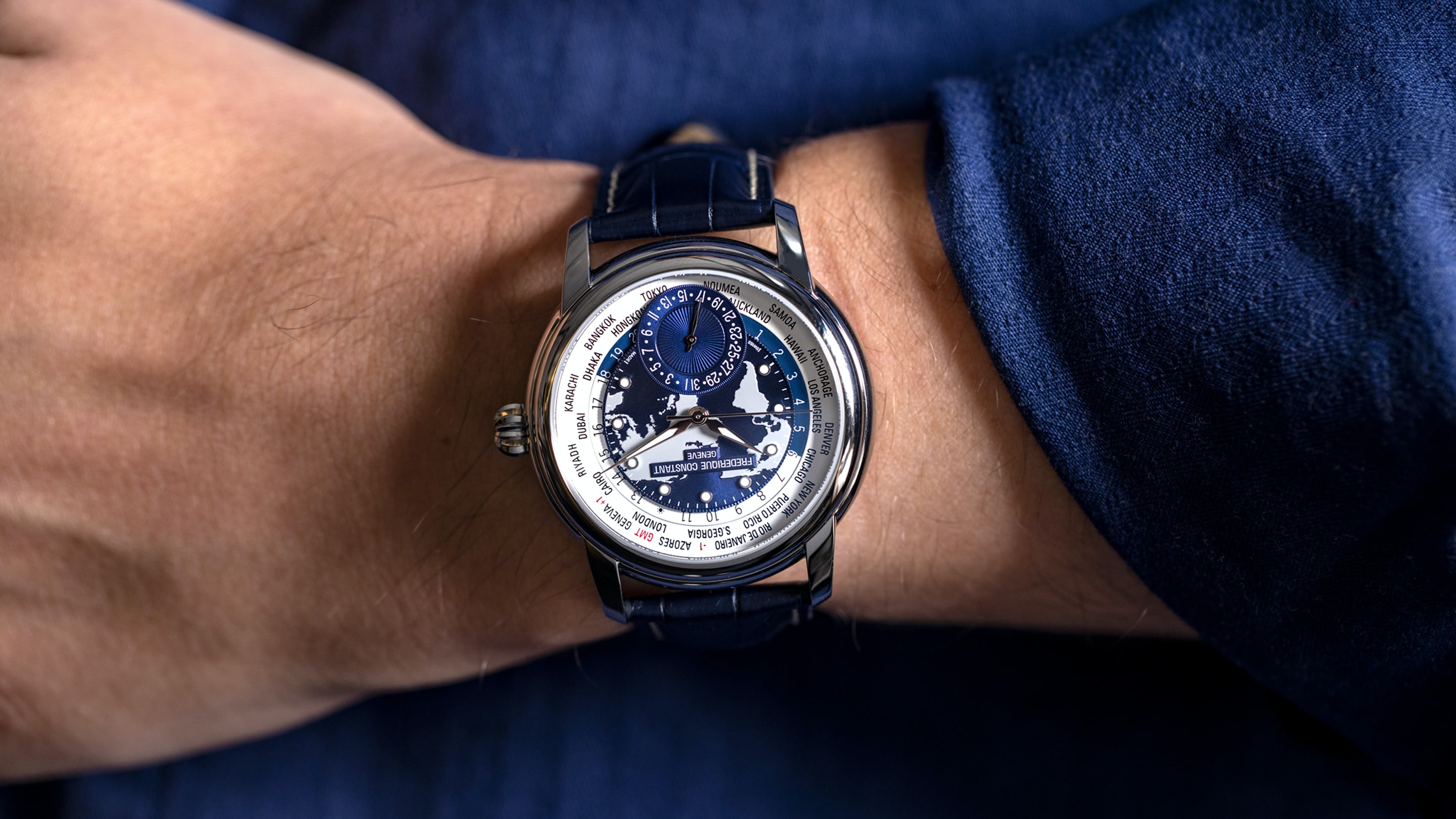 Hands-On Frederique Constant Takes Us Around The World On A Budget, And Does It In Style

World timers used to be the realm of the super-wealthy, but brands like Frederique Constant are out to change that.

It's almost the holiday travel season and, as always, I'm really wishing I had a travel watch. I've written before about how inept I am when it comes to calculating other time zones (U.S. Mountain Time is the bane of my existence, but that's neither here nor there). And while I'm pretty staunchly a fan of GMTs, there's something just so elegant and romantic about a world timer. 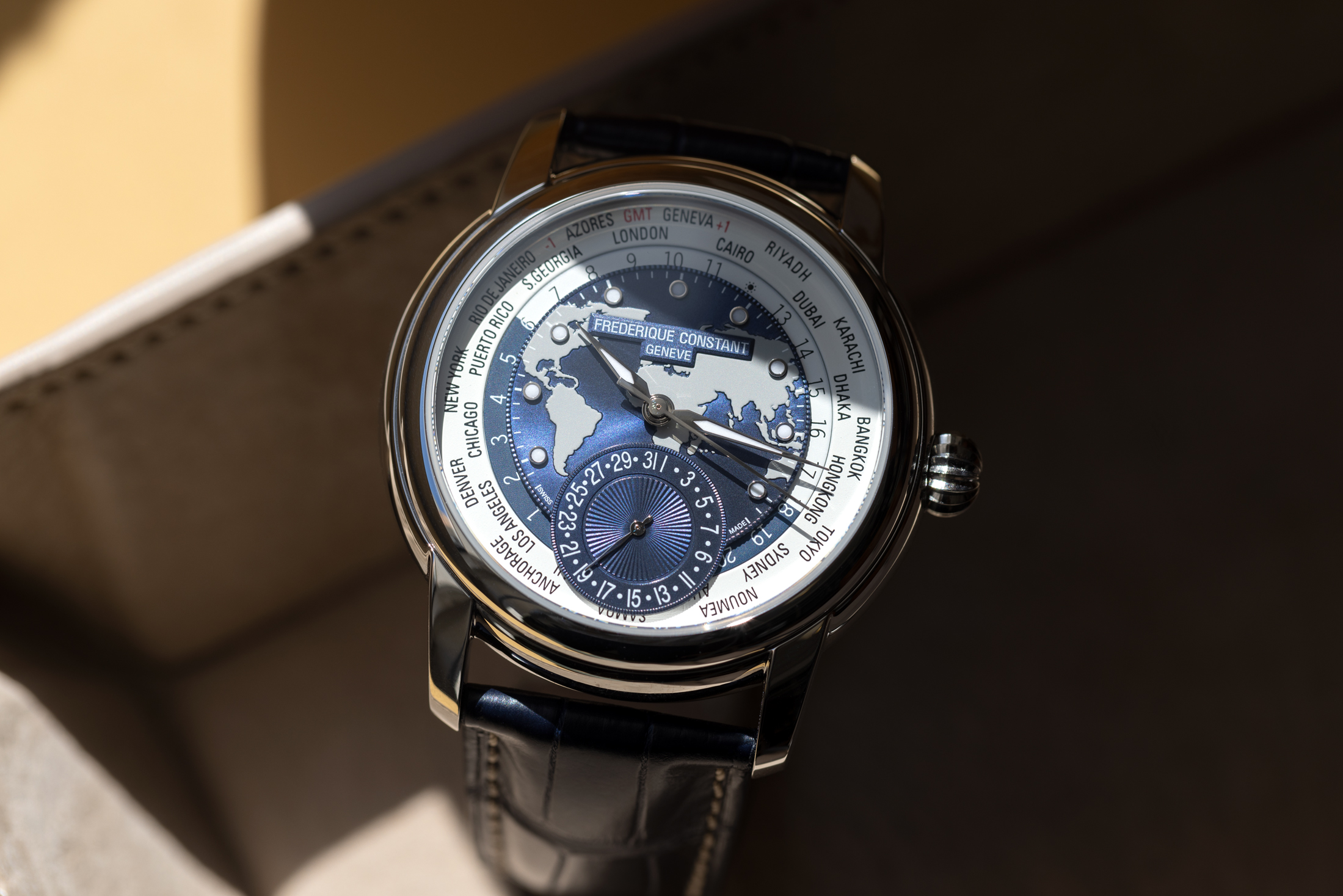 World timers were once the epitome of inaccessible luxury, one of the most collectible and expensive vintage complications of all time, and an incredibly pricey proposition even for new references. But a number of new players have come on the market in recent years and made the complication more accessible to the masses. World timers are visually complex and often confusing watches, especially if you haven't spent a lot of time with them.

Enter Frederique Constant. The brand has long had my attention, in large part due to the value proposition of their Highlife Perpetual Calendar, which provides an affordable entry point into what generally is considered an expensive complication. As much as I love looking at rare and expensive watches, my personal purchasing habits have always left me looking for a good deal. 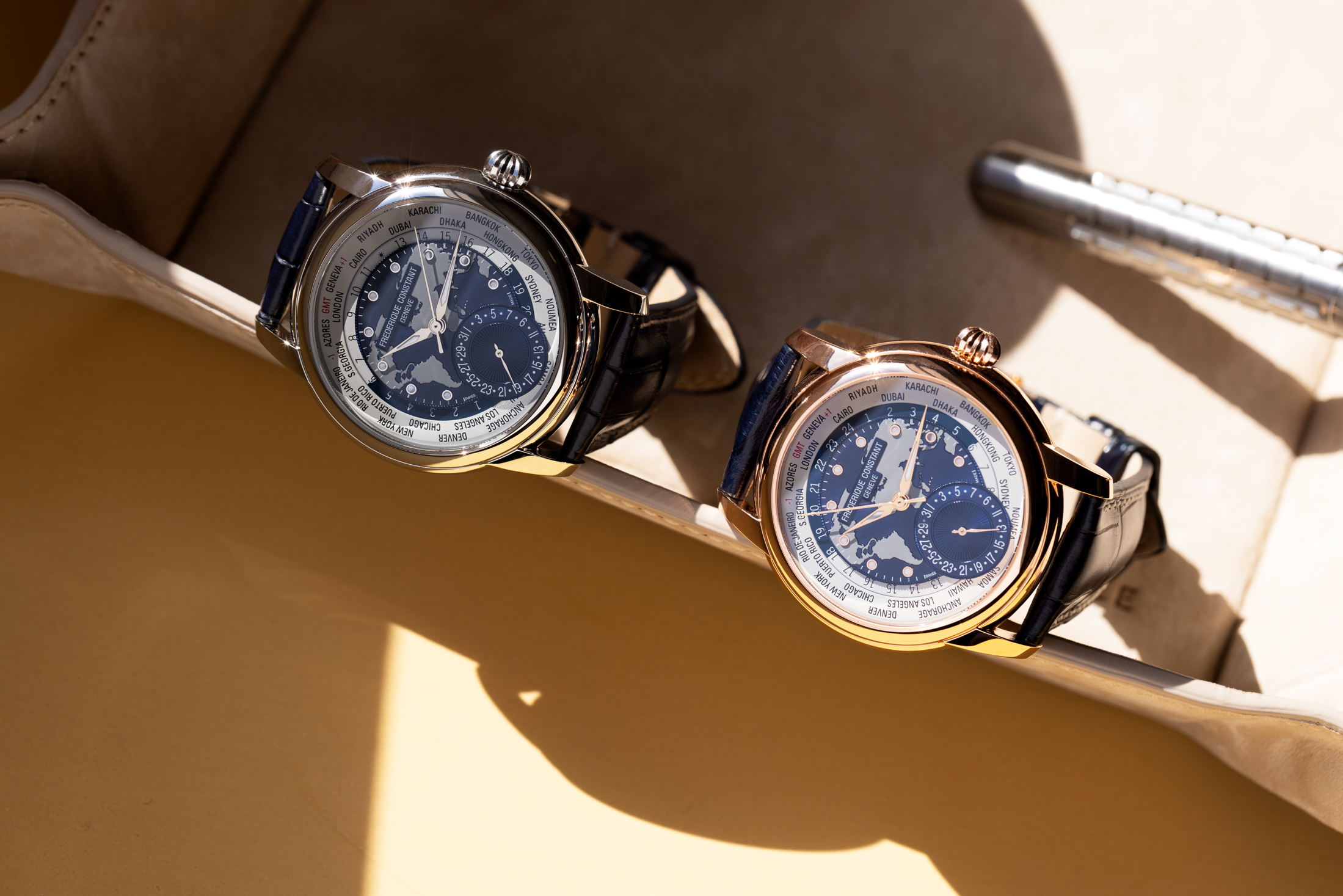 The Frederique Constant Classics Worldtimer certainly fits my definition of a "deal." Starting at $4,395 USD in steel ($4,495 USD for the model I got to spend some time with, and up to $18,995 USD for a watch in rose gold), it's more affordable than most world timers on the market. It's also a watch with a good amount of variety in the lineup. On the secondary market you can find grey, black, and green dials that no longer feature in the current collection, and the brand continues to release new iterations, with market-specific editions like a recent American-themed "Summer of '76" release and a new black PVD-coated titanium model announced just last week.

For all their various releases, the biggest selling point is the simple fact that the design language visually evokes what I've come to see as the platonic ideal of the complication: the Patek 5230. And it's no wonder it fits that classic mold. It is under Frederique Constant's "Classics" category, with a more traditional case shape that features round edges and curving lugs. But it's the dial layout that drives its nature home. 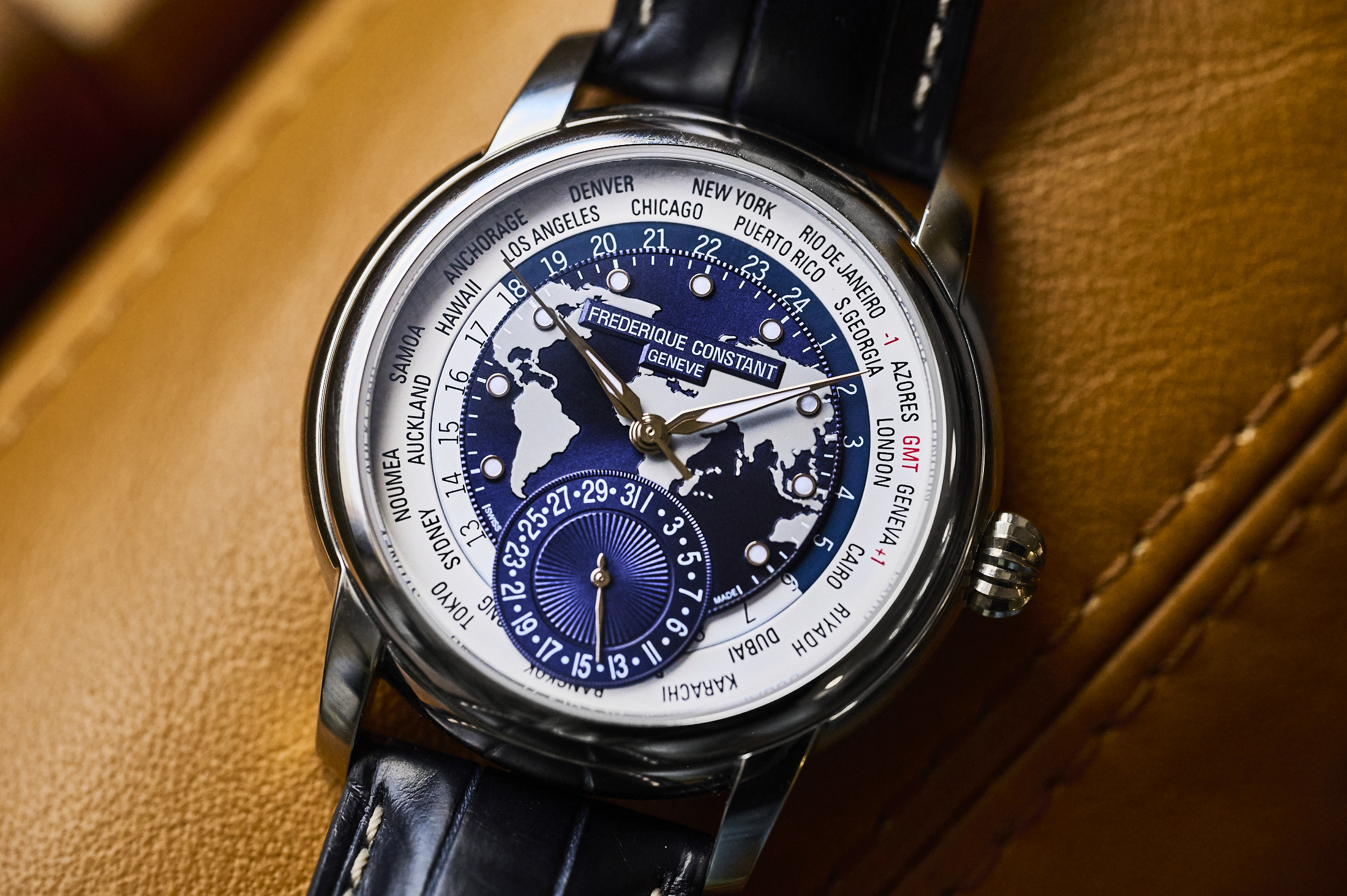 There are various approaches brands have taken over the years to try to make the layout of a world timer more simplistic and legible. But in my opinion, none have been more successful than others because, as I see it, the logic behind any solution is flawed from the start. Any world timer will inevitably be cluttered. That's the nature of trying to display 24 time zones on a small dial. But by taking the traditional approach – keeping the reference cities toward the edge – instead of trying to reinvent the wheel, it's easier to ignore the 23 other time zones and focus on just checking the local time and going about your day. And despite my love for a good GMT, I have to admit I think that for a lot of people a world timer is far more practical. Whether you're traveling for work and wanting to see what time it is back home or sitting at a desk in New York and picking up the phone to call Geneva and Hong Kong in quick succession, the entire world is at your fingertips, not just two or three time zones. 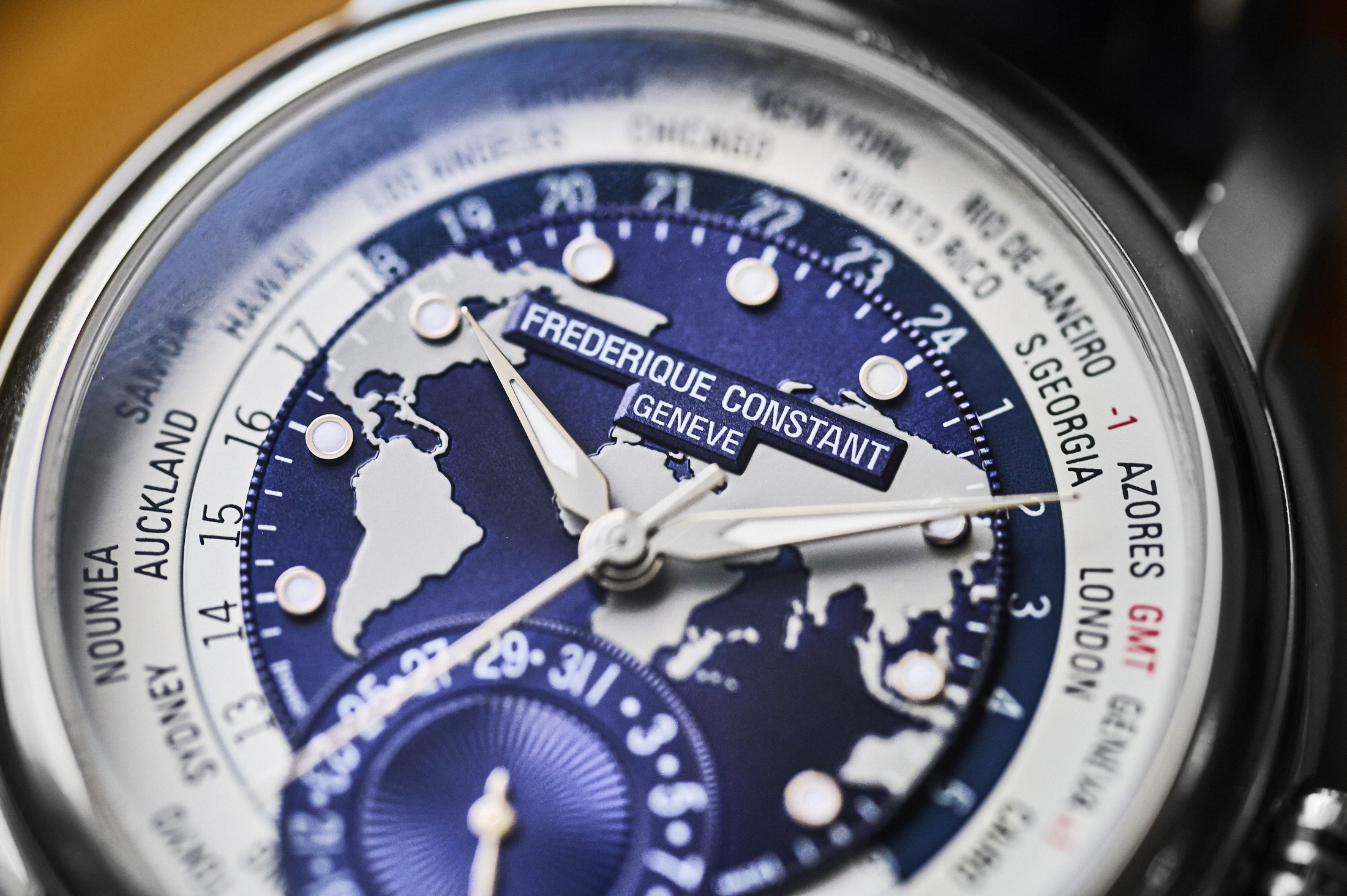 The only downside of Frederique Constant's design, unlike Patek's "platonic ideal," is the inclusion of the date. Sure it's practical, but it obscures some of the time zone names and hours at six o'clock on the dial, one of the issues the Nomos faces with the 24 hour indicator on it’s watch. Frederique Constant's placement feels more harmonious, in part because of the horizontal symmetry of the date subdial at six instead of three, but also because the tolerances between the moving time zone, 24-hour wheel, and date disk seem to be tighter. It just feels more crisp.

Inside the case is something I gather Frederique Constant takes a lot of pride in, a "manufacture" automatic calibre FC-718. I can't tell you a lot about the development of the movement but it has 38 hours of power reserve and runs at 4Hz. The mainplate and area below the balance wheel are decorated with different radii of perlage while the top bridge has gilded engravings over the circular Côtes de Genève. It's perfectly acceptable and gets the job done, which seems to be what Frederique Constant was aiming for. 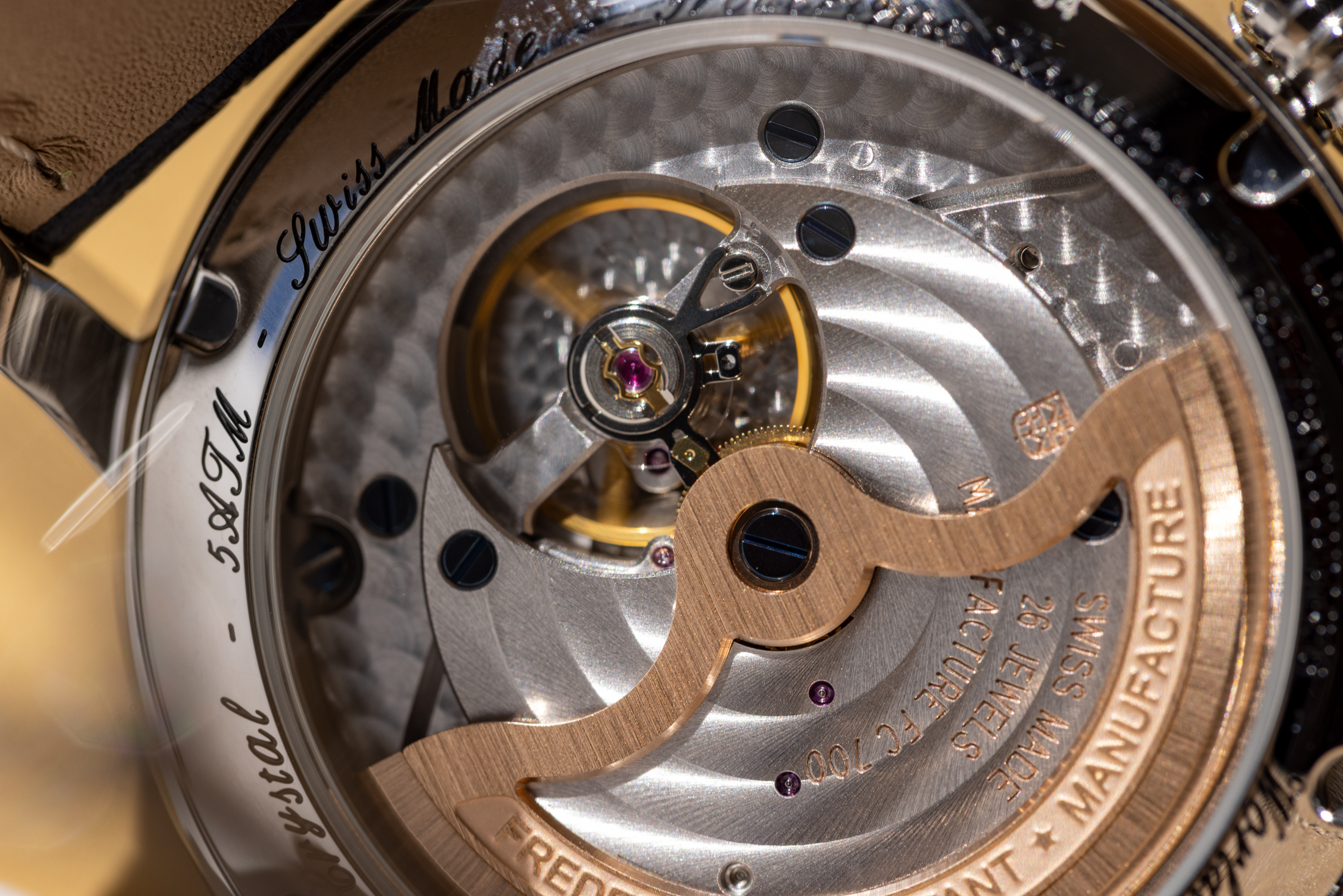 The watch comes in at a pretty sizable (to my taste) 42mm wide but balances that out with a reasonable 12.1mm thickness, which didn't feel too overbearing. And while the 22mm lug width might mean you may not be able to reach for your more common straps, the alligator leather strap is comfortable and classic and the deployant clasp, like the one included with the watch, always feels more upscale to me. The crown is a nice touch, as well; different than most but elegant enough to fit in with the traditional design. 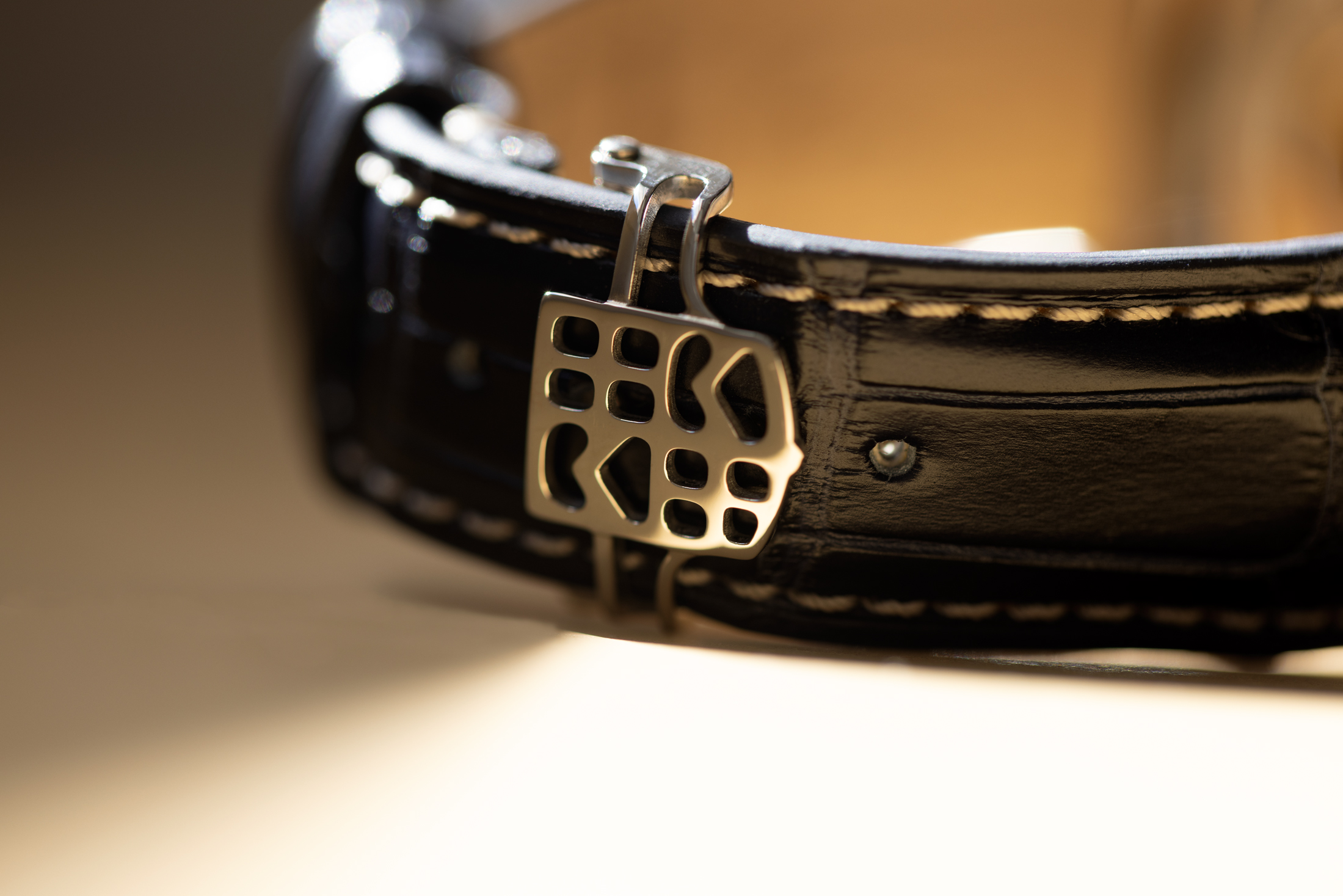 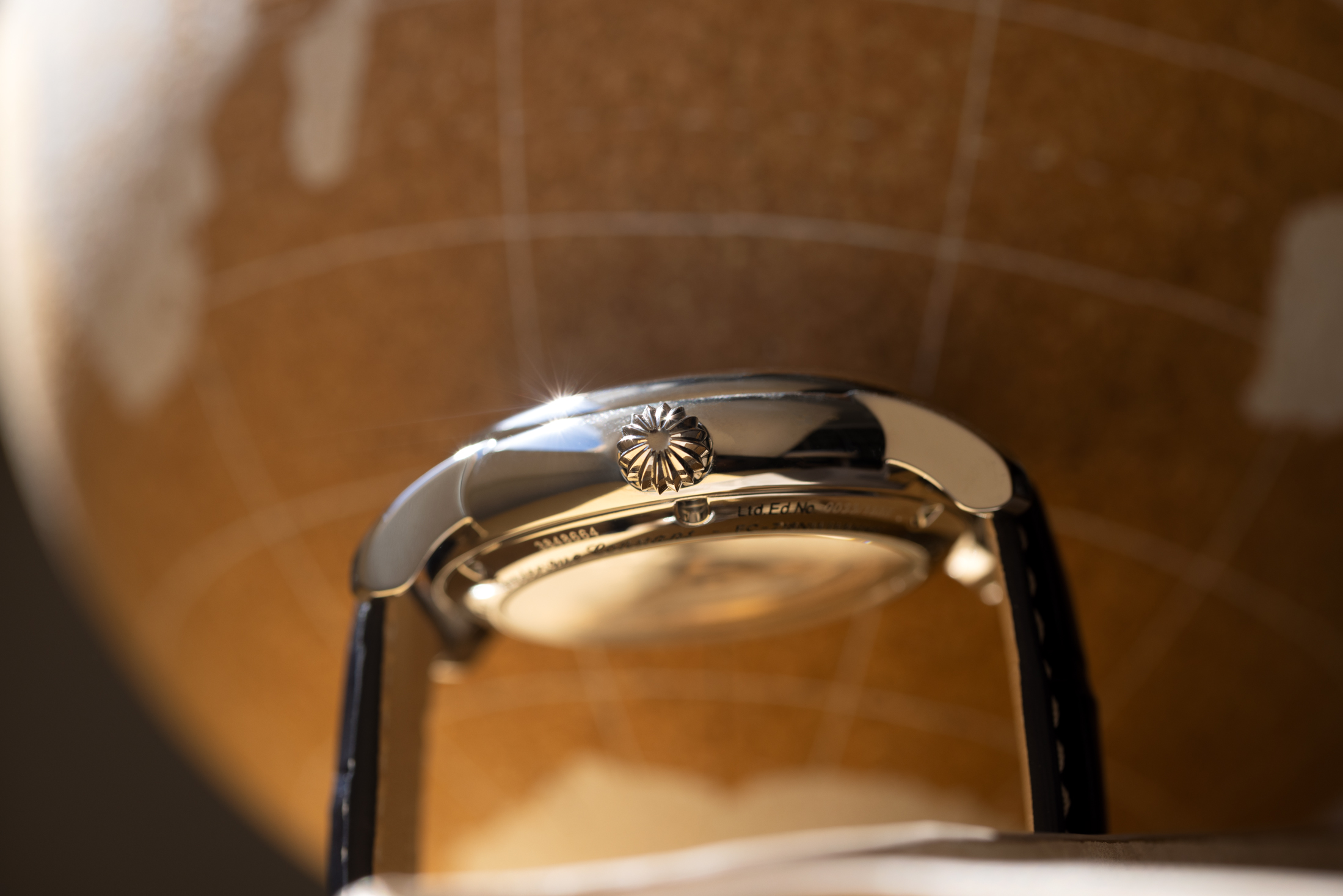 Crown on the Frederique Constant Worldtimer.

For all my references to Patek, let me be clear: It's not as though I'm telling you that Frederique Constant has cracked the code and given us a true substitute for a "holy trinity" watch at 1/10th the price. Even at a quick glance, you'll realize that the finishing leaves something to be desired.

Sure, there's the movement which, through the display caseback, looks pretty simply and roughly industrially finished, but that's expected for the price. The printing on the dial isn't particularly crisp, either and there's the case, which is a bit heavy and not particularly well-finished. But oddly enough, it was the applied Super-LumiNova hour markers and hands that really drove home that this is a budget option. The hour markers don't seem to mesh well with the rest of the dial display and felt kind of unnecessary when un-lumed stick indices would have sufficed. If nighttime legibility was so key, the missing three markers by the date cause enough of their own issues. Then there are the hands, thin and hard to see at quick glance, even in the daytime and with Super-LumiNova which, again, lead me to wonder whether people need a luminous world timer. Whether or not it was intended as a dressy design choice, I'm not sure, but they look slightly flimsy and out of place. 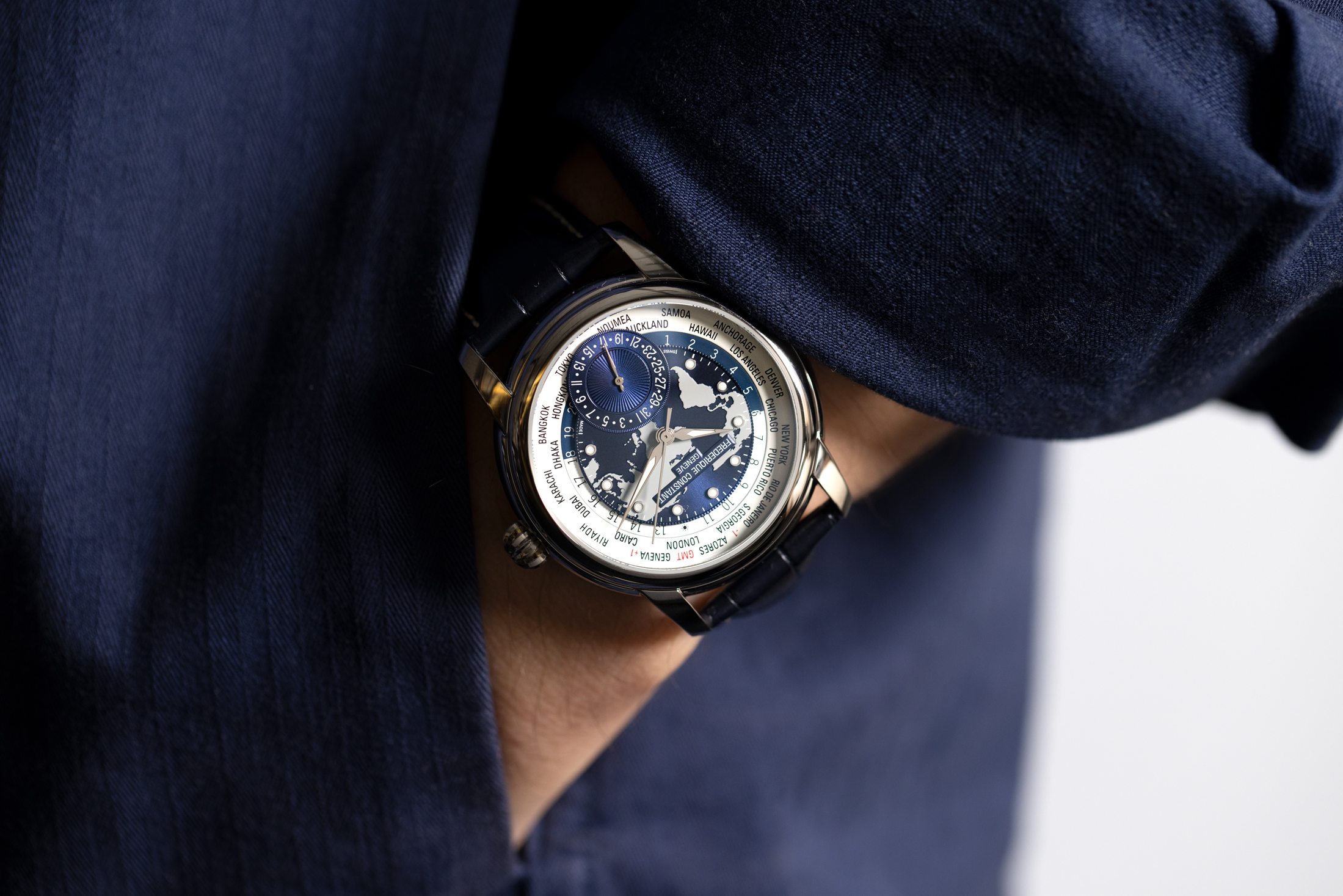 Regardless of my complaints, I don't think that the elegance of a world timer should be reserved for those who can afford a $10,000, $40,000, or $90,000 (for a cloisonné-dialed Patek Philippe) world timer. In fact, maybe it was a bit unfair to set up the comparison in the first place. I don't think anyone at Frederique Constant is setting out each day with the intent of trying to be Patek, Jaeger-LeCoultre, Vacheron Constantin, or anyone else. Rather, I get the sense that what they realized long ago is that enthusiasts in this community come in all shapes, sizes, and budgets, and that fact shouldn't preclude anyone from having a great experience with a variety of watches, and that's something I can get behind. 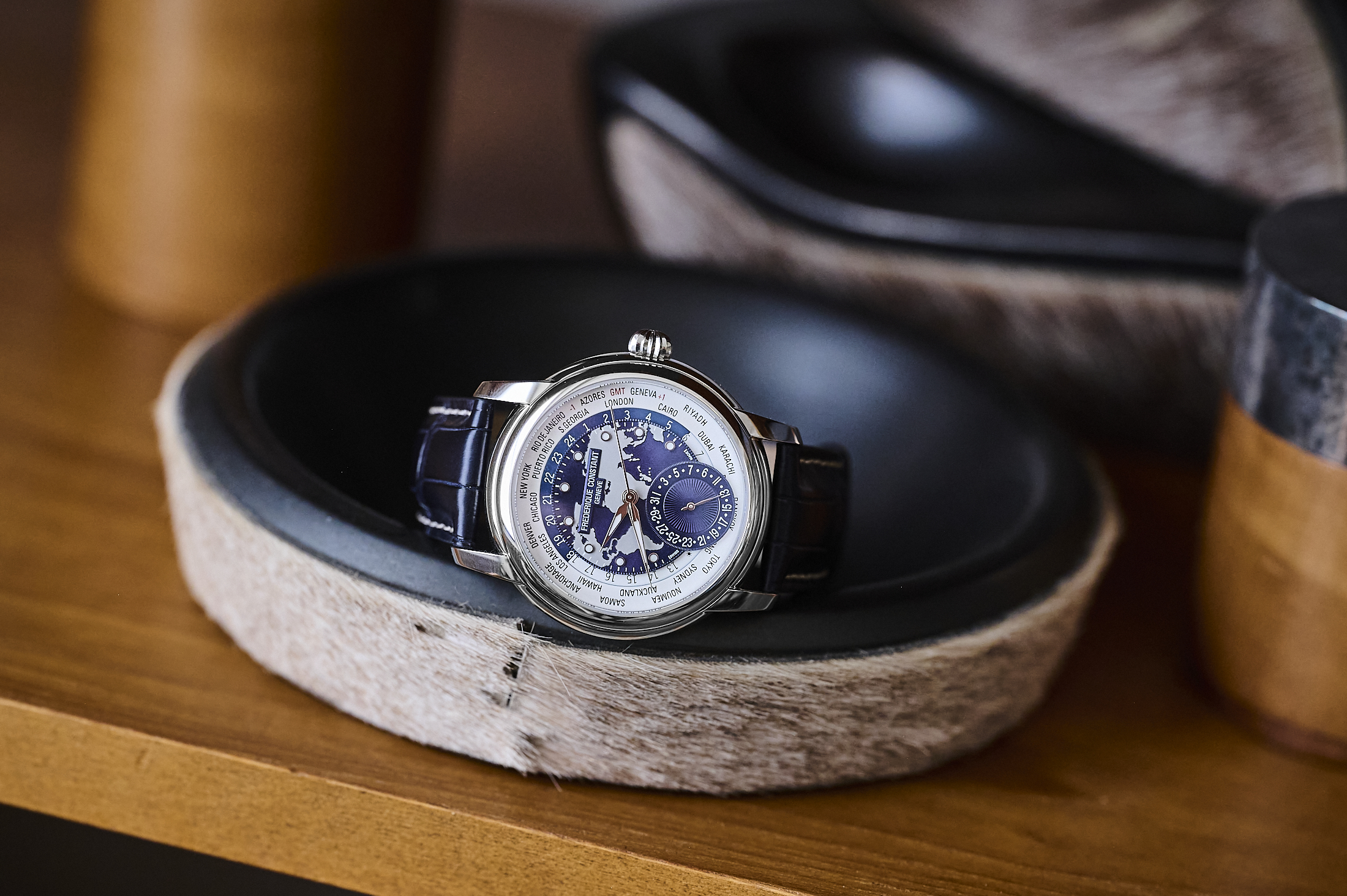 At the end of the day, the Classics Worldtimer hits a great balance between emotion and value and gives entry-level enthusiasts a taste of a complication that, until not long ago, might have been far out of reach.